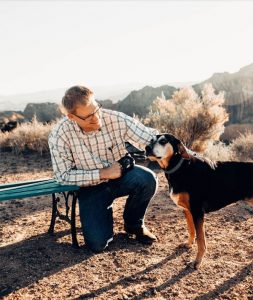 Dr. Bowler has been in veterinary medicine for nearly 10 years. He graduated from Washington State University after completing his undergraduate degree at Southern Utah University.

Dr. Bowler hails from a long line of Southern Utah natives, six generations to be exact. Although he attended school in St. George, his favorite hours were spent working alongside his grandfather and father on the family ranch in Gunlock, UT. While working on the ranch, he developed a love for all animals and a great respect for the harsh elements of southern Utah.

Dr. Bowler and his wife Jill have two wonderful children and a sweet old hound dog named Pepper. He is thrilled to be a part of the hard working staff at the Animal Clinic of St. George and looks forward to meeting you and your family. 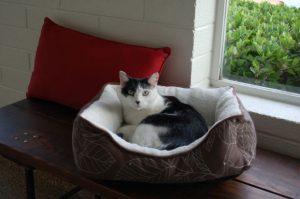 Smudge is our office manager, owner and official greeter (even if she sleeps on the job most days). She was found as a stray and battled a severe neurological illness before landing her full-time gig at Animal Clinic of St. George. She loves people, other cats and getting treats at the end of a long, hard day of work.

Font Resize
Contrast
Accessibility by WAH
Call Us Text Us